To select a Harley Davidson HSR or HS40 Carb Kit, Parts or Accessories, “HOVER” over Harley carbs on the menu to the left of the screen and click on your relevant selection from the drop down list.

These carburettors are for all Harley Davidson owners and are available in standard aluminium finish or the chrome and polished version.

NOTE:  Choke cable is included except in the TM42-6, which will use stock cable from CV type carb. 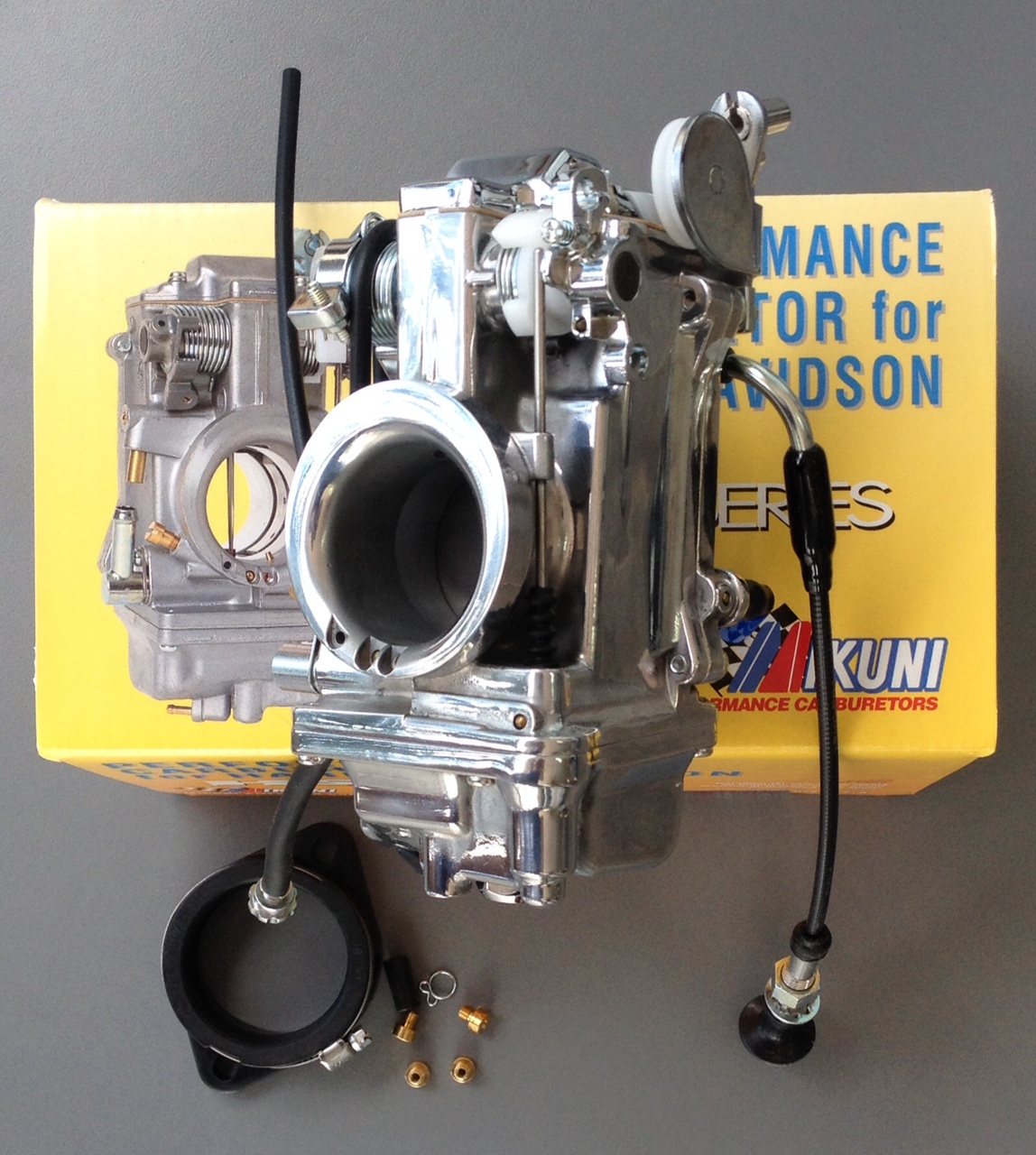 Mikuni’s  HSR48 is a special version of the proven HSR42 carburettor. Its purpose is to provide maximum airflow for the most demanding high performance engines.

The amount of power any engine can deliver is directly related to the volume of air it can use in a given time together with its efficiency in using that air. Everything else being equal, more air equals more power.
Leaving port and combustion chamber design aside, air flow through an engine can be enhanced or limited by anything it must pass through. A restrictive air cleaner assembly, too small carburettor, restrictive intake manifold and a restrictive or poorly designed exhaust system can (each or all) limit power output. The HSR48 was developed to deliver additional air flow to highly developed engines.

Modified Harley or Harley-based engines tend to fall into one of three categories:

There is little to be gained from installing the HSR48 on an engine with stock cylinder heads or one that is going to be fitted with an exhaust system more suited to looking good than passing gas. The number of bolt-on performance options becomes very narrow when one attempts to get their engine above 100 (or so) Horsepower. We advise that you carefully consider the suitability of other performance components when you consider installing the  HSR48.

Our HSR48 is slightly larger than either the HSR42 or the HSR45. It is taller and the spigot (engine side) is larger in diameter. This may result, with some installations,  in interference problems with chassis parts. While Mikuni does have a manifold assembly that fits the “48” to a stock Evo or Twin Cam motor, we do not make special manifolds for engines with non-standard cylinder head spacing or larger diameter intake ports. The large variation in “Ground Pounder” engine configurations together with the relatively small number of such engines limits Mikuni’s ability to produce special manifolds. You may need to cut some metal.

Air Flow:
The stock Harley carburettor flows about 185 CFM (cubic feet per minute) when flow is measured at a pressure difference of 12-inches of water. All the Mikuni HSR-series flow considerably more:
Stock: 185 CFM
HSR42: 213 CFM
HSR45: 237 CFM
HSR48: 270 CFM
If carburettor air flow were the only factor, the HSR48 could deliver almost 50% more power than the stock carburettor. It isn’t, of course, but a 50% gain could not be realized without a high flow carburettor.
In fact one of our test “48s” was fitted to “Fireman” John Kownacki’s 113″ motor with which he then recorded 156 Horsepower on a Dynojet 150 Dyno. This is a streetable engine and Mr. Kownacki prides himself on the fact that he rides it nearly every day.

If you think your motor is a candidate for an HSR48, contact T.D. Hatrick & Co. (details below).